The Limits to Equality

Al sells shoes. Fred collects garbage for the same salary. Are they equal?

Sarah works in downtown Manhattan for $60,000/year. Beth gets paid the same amount but lives in a southern city with a much lower cost of living. Are they equal?

Sally works in a grimy industrial city for $40,000/year. Susie works in a beautiful resort town for the same amount. Are they equal?

Stephen is a tenured college professor making $60,000/year; he gets summers off and the occasional sabbatical. Charles writes software for $60,000/year working fulltime at a very stressful occupation. Are they equal?

Charlotte works as a teacher for $30,000/year, gets summers off and a very generous retirement plan. Brenda makes $40,000/year working full time in the private sector, and has to contribute to her own 401(k) plan in order to have retirement money. Is Brenda better off?

Humphrey has climbed the corporate ladder making a steady climb from $40,000/year to $80,000/year over ten years. Joe started his own business, losing both money and sleep over the first few years, but now is making $100,000/year. Is Joe better off?

Equality of Income is not Equality

The only way to truly equalize jobs would be to have some sort of auction where everyone has an equal starting point. Consider an imaginary socialist utopia where we make all jobs up for grabs to the lowest bidder. Anyone who is overpaid would get displaced by someone who considers the job worth doing for a lower rate of pay. Unpleasant jobs would go to those who demand a higher wage. Such an approach would be more egalitarian than anything attempted by a Marxist government.

Were we to apply this system to the U.S. economy, CEO of General Motors would not be a super high paying job. In fact, someone might opt to take the job for nothing, in return for the power it entails. The question is, would this person do a good job?

(Come to think of it, the British government did once sell military officer commissions this way, and somehow they beat Napoleon…)

We could modify our bidding system and require certain proofs of competence. And we could probably drum up some minimal standards of performance as well.

Such a system might still be more egalitarian than the Soviet model. It would probably work better as well. But it still has serious problems. Those jobs that involve control over capital would be subject to serious corruption. And there would be little incentive for excellence – unless we allowed some actual inequality.

Like it or not, ability and drive are not equally distributed. Once we put into place any standards of competence or accountability, those with ability will get access to better situations. We are stuck with either sacrificing general prosperity, or putting up with some inequality.

While I don't think perfect equality is possible or desirable, we could do a lot better. And our imaginary socialist utopia above provides some keys. To increase equality we must decrease job security for the desirable jobs. We need to reduce barriers to entry and eliminate tenure. Cartels, guilds and artificial restrictions on the number of job entrants (such as taxi medallions) need to go. This loss of job security needs to extend to the very top. In order to have a better market for top management, we need to make it easier to start new corporations and easier for old corporations to fail. No corporate bailouts; no golden parachutes.

In addition, we need to look out for rent-seeking: people buying incomes – which results in the rich using their riches to get richer.

Stop and meditate on the two paragraphs above a bit. I realize what they say is counter-intuitive. It is traditional for the Left to be in favor of job security, and I just said the opposite. And I suspect those on the Right are also having a cow right now. One of inequality's biggest attractions is the thought of getting "over the hump." And I'm calling for getting rid of humps.

Keep in mind that the elimination of job security also gets rid of job insecurity. Lose your job? Just bump someone who you think is overpaid for what they are doing.

How dare I attack the rich? What gives me the right to take away people's sinecures and cushy financial situations?

The answer is: I don't have the right to do all of the above. Nor do I want to take equality to the max. I'd personally like to get ahead a bit, and don't want a lazy backseat driver telling me how evil I am.

That said, I do aspire to a great deal more equality than we have today. In fact, I am to the left of many Democratic politicians. Many of the cushy sinecures in our economy are created by oversized government. Other sinecures can be removed by creating better private institutions, such as better capital markets.

Finally, I would use the might of the state to tax those who would rent-seek by depriving others of their share of Planet Earth. This is keeping with a generalized theory of natural rights. 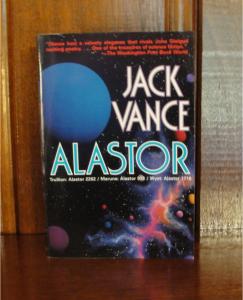 Many Marxists now refer to the 20th century's attempts at Marxism as “State Capitalism.” Fair enough. Jack Vance took on the true ideal of communism in his novel “Wyst.” The result is a semi-dystopian comedy in a far-future “egalistic” society. Most work is automated. No one has rank, or a job. What tasks remain are randomly assigned. Vance played fair. He showed both the charms and the problems. The result is a very funny novel.

“Wyst” is not sold separately. It is the third of three novels in the book “Alastor.”

Removing sinecures can be quite unfair. Many of those who have them today worked very hard to get them. Today's tenured professors were yesterday's assistant professors. Today's taxi medallion owners paid good money for the privilege. Many overpaid professionals paid a high price to get their positions. Today's first generation landlords paid a price for the land they now rent out.

1. How do we phase out unneeded positions of privilege without being unfair to those who paid the price?

2. Compare this situation to the situation in the mid 1800s. Should slave owners who paid large amounts of money for their slave been compensated as part of a program of liberty?

3. And what about the aged? If it is harder to buy an income – get over the hump – they suffer great inequality as their bodies and minds get too old to work.

Liberty and Equality: They go Together

Freedom from the Boss