Tesla makes cool toys. If I were oozing great gobs of excess money, I might be in the market for one of their cars myself – after buying a beach house, a country club membership, a really big workshop, a bigger garage, a few politicians, and a suit made of hemp. But I am not oozing giant wads of extra cash, and neither are 99+% of Americans, so Tesla automobiles are not a near term solution to the global warming problem.

True, the geniuses at Tesla are developing some cool technology. Tesla Motors is trickle-down economics at its best. But they aren’t solving the fundamental problem: lithium batteries are expensive. So we are looking at a rather slow trickle.

But why wait? There is huge market for cheap special purpose electric cars waiting to be served right now! In this article I will explain how to build dirt cheap electric cars suitable for ordinary wage serfs. In theory, they could be built with decades-old technology. In practice you will want to make some use of modern advances, but for the most part you could use off the shelf parts.

Read on if you want to reduce noise, air pollution, traffic congestion, and greenhouse gas emissions.

Suppose we designed an electric car for a mere 30 mile range or even just 10 miles. We cut the battery size down by a factor of 10 or even 30!

Factors of ten are significant.

By cutting down the battery weight, we can cut down the size of the motors and the frame. Since rolling resistance is proportional to weight, we thereby cut our energy storage needs even further.

But what good is an electric car that only goes 10-30 miles on a charge?

Answer: that’s plenty for tootling around in cities.

An Electric Car for the Last Few Miles

A very clean solution is to provide rental bicycles at transit stops. This works nicely when the weather is fine and the city is reasonably flat. It doesn’t work so well for well-dressed business people on rainy or muggy days, or mothers toting young children.

This is where cheap, small, electric cars could shine. Imagine if your public transport stations included a large inventory of electric rental cars that you could get for the day by simply swiping a membership card. If the cars have a range of ten miles, the transit station could serve a five mile radius. For many cities this is an entire business district! You could bring in suburban commuters with conventional rail lines to a single good sized railway station and let them continue from there with electric rentals.

But what of parking? One of the arguments for public transportation is that it reduces the need for parking.

I have a simple solution. But first, let’s get the price down even further.

A general purpose automobile needs to be able to confidently cruise at 70 miles per hour. And it needs even more power so it can pass – or simply get up to 70 quickly when merging onto a busy superhighway.

Electric cars can better tap into their full power at slow speeds than gasoline powered cars. In order to have enough power for confident high speed passing, an electric car will have gut wrenching acceleration off the line. (Power is force times speed. Even before we factor in air resistance, it takes three times the power to produce the same acceleration at 60 mph vs. 20 mph.)

Downtown city streets typically have speed limits between 20 and 35 miles per hour. Some cities have some 45 mph boulevards near downtown, but these are generally smaller cities, and that’s not our target market.

Here is a very simple model of air resistance: Think of the air as a bunch of suspended particles. When you drive you knock them out of the way. Force is change in momentum per time. Momentum is mass times velocity. As you speed up you knock the particles out of the way faster – in proportion to your speed. But as you speed up you collide with more particles per unit of time – also in proportion to speed. Frictional force is thus proportional to the square of your speed. And since power is force times speed, the power required to overcome friction is proportional to the cube of your speed. It thus takes roughly eight times as much power to push the air aside at 70 mph as at 35 mph.

(This is why race car engineers pay a lot of attention to aerodynamics. Changing the coefficient of wind resistance can have as much or more impact on top speed than marginal improvements in engine power.)

Keep the top speed down and you reduce the need for motor power dramatically. This saves on expensive rare earth magnets. We might even do without entirely. We can also largely neglect air resistance. Design can focus on price, aesthetics, and cargo capacity.

Of course, for commuters, we can also save on capacity. Most of our market will be for one or two seat models, with some room in the trunk for brief case and shopping bags. Some deluxe models should also be built for family visits to the city.

The electric cars I envision are small and light. Some may worry about safety. Fear not! Some basic physics comes to the rescue.

Kinetic energy is proportional to the square of speed. A car travelling 70 miles per hour has four times the energy of one travelling 35 mph. Energy is also force times distance. This means you need four times as much crumple zone to survive a crash into a tree at 70 as one at 35.

Gasoline engines don’t crumple. Look under the hood of a modern front wheel drive car. There isn’t much crumple space. A small electric car with a “frunk” (front trunk) can have more crumple zone than a full sized SUV.

A more reasonable concern might be the problem of getting smooshed between two larger vehicles. Consider the solution in the diagram below: 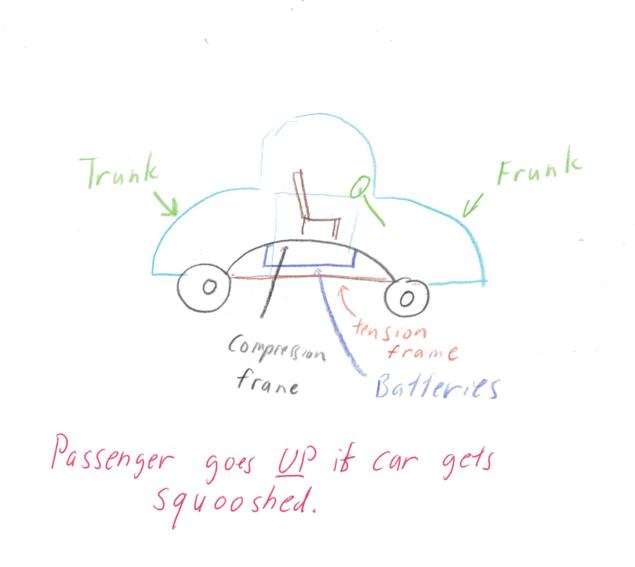 And always keep in mind that we have way more protection than you get on a bicycle or scooter.

More stations combined with buses means less parking – assuming people don’t just drive downtown because public transport is so slow. But let us not overestimate the savings. Buses take up street space. Sometimes entire lanes are taken up by buses. That’s a lot of high grade pavement! Buses and taxis also need places next to the sidewalk to stop. This uses up potential parking space (or clogs the lane when buses don’t pull over, a problem I find particularly annoying).

The solution for our compact electric rentals is compact parking garages. Conventional parking garages are bulky and expensive. They have to be incredibly sturdy to hold the weight of highway class cars built from steel. They need bulk to hold the ramps that allow the cars to reach their spots, and the ramps need to be wide enough to allow the cars to maneuver into their parking slots.

Why not park these cheap rental cars the way we park boats! 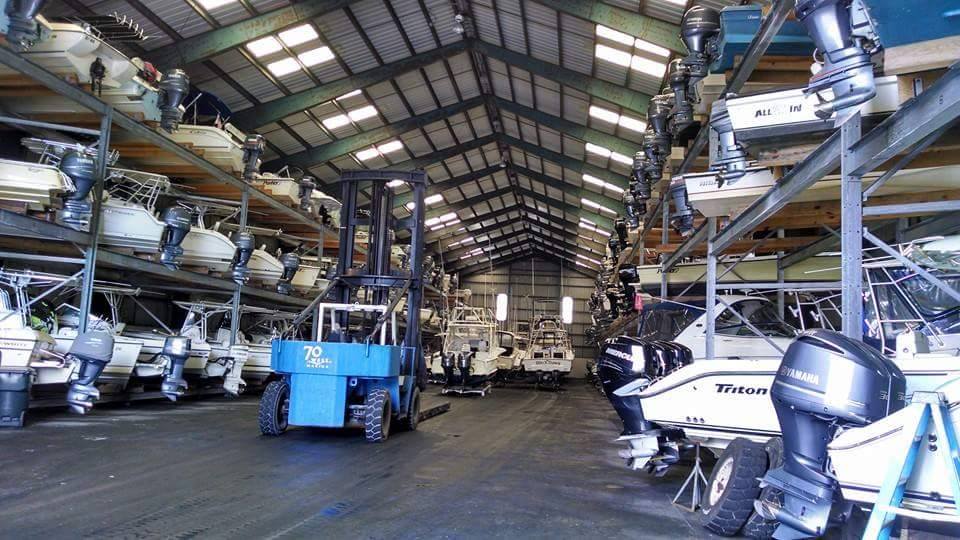 Instead of ramps, have a fork lift raise the cars and place them into stacked slots. Public transport stations could have a really big inventory using the technology. You could use deep slots to place multiple cars in a slot. And it wouldn’t be that hard to have some robot tech to automatically connect the stored cars to chargers, and keep track of how long each car in the inventory has been charged.

These cars could be adapted to take less space in more conventional spots as well. With no drive shaft and no need to worry about high speed stability, four wheel steering is a reasonable possibility. Nearly square cornering in really tight parking garages would be practical, as well as tighter parallel parking.

Let us review the benefit to suburban commuters:

But I don’t envision selling to consumers directly – at least not a first. (I could imagine city dwellers actually buying these once the parking infrastructure is in place. Or I could see city apartments offering parking with free charging. The electricity wouldn’t cost much compared to the savings on parking space.)

The first real purchasers are likely to be city governments. Cities as a whole benefit:

And then there are the general welfare benefits:

We are looking at something in between golf carts and real cars. Gauge your capital requirements accordingly. That said, prototypes could be built by mechanically inclined enthusiasts using a mix of off the shelf technology and hand fabricated frames. Metal tubing, fiberglass or even wood could do the trick. The tech level is really more like building a small boat than a modern general purpose automobile.

I don’t know how much effort it would require to make such vehicles street legal. I do note that many cities still allow horse drawn wagons on streets, so I suspect that there is a legal niche for vehicles not capable of highway speeds. (And they still allow slow farm machines on highways as well, come to think of it…)

If you are a Silicon Valley winner or a movie star wondering how to save the planet, this project may well be within your budget. Calling Leonardo DiCaprio: Send me money.

It’s also a worthy project if you are the president of a developing nation that has infrastructure problems. Running with this idea may well be cheaper than imitating the development path of the United States.