A Fuzzy Look at the Start of Human Life

Is a human zygote a human? How about a human embryo? A fetus? At what point in human development does a glop of human flesh become a true human? The question is difficult. Ideologues at both extremes can claim to have an answer but they don’t. Revealed preference indicates they don’t fully believe their own rhetoric, which I will demonstrate below. But first let us look that those caught in between.

The Catholic Church these days declares that human life begins at conception. Radical liberal feminists declare that life begins with independent existence, an ironically Randian perspective. Which camp is correct? Should we put it to a vote? Suppose we had a vote and 51% opted for life at conception. How would that work out? Would the law be followed? Would juries really prosecute early abortions as homicide? How about selling or consuming birth control pills? Birth control pills can terminate zygotes as well. Conversely, suppose 51% voted for the extreme pro choice option. Would those who value life stand by for casual terminations at 8 months? Or could we expect significant civil disobedience or even domestic terrorism? The problem here is not democracy; it is crude democracy. Majority rule, especially between divisive extremes does not reflect the overall will of the people.

We could do better by splitting the difference. Suppose instead of having an all or nothing vote, we could set the age at which a fetus becomes human as a weighted average. If our vote is evenly divided, we end up with an age at which a fetus becomes human at the midpoint, somewhere close to the age of “quickening.” This is the age at which abortion was declared murder under the common law according to Justice Blackmun, so the solution might work. If the moral majority is in fact a minority, then the age at which we declare a fetus as human might be later, perhaps near the age of viability outside the womb. In this case, the Roe vs. Wade ruling would reflect the democratic consensus – by this still crude metric.

The above split is more workable, but it does not represent the overall view of society, or even the revealed preference view of many of its members. Who would enforce a murder charge for an abortion performed a day after the start of legal viability while still considering an abortion the day before as an innocent act?

We can do better. But to do so, we need to harness more powerful philosophical tools: fuzzy logic in particular. And then we need to devise a democratic procedure to harness said tools to come up with solutions we as a society can abide by.

Humanness as a Function of Time

As I showed in the previous chapter, the line between “chair” and “not chair” is more challenging than one might casually suppose. But unless you are a philosopher, a robot designer or a lawyer dividing an estate that contains expensive furniture and modern art which can be mistaken for furniture, the question is insufficiently important to dwell on. The start of human life, however, is important and concerns all citizens. Liberty, the rule of law, domestic tranquility and possibly even the future of the human race all rest on this difficult question.

I could set up a chart with the different gestational stages and begin asking the question: “How human is this lump of flesh” for each stage. That might be the better way to go, but I have a predilection for graphs of continuous functions, so instead we shall look at humanness as a function of time. We can plot the two extreme positions as the red and blue lines on this graph: 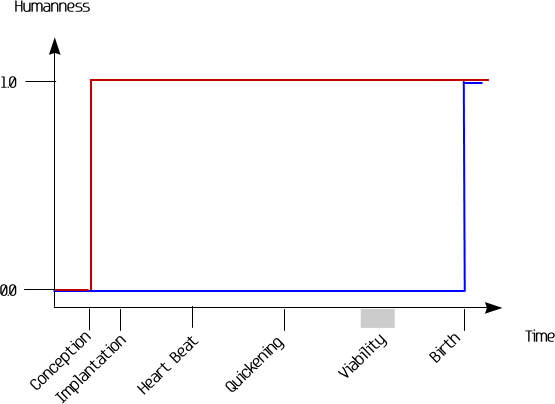 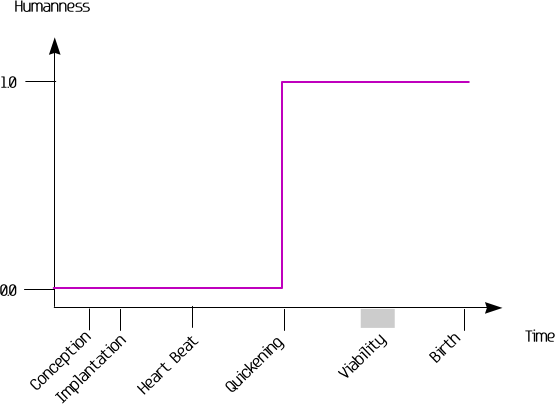 But doing so is in my opinion suboptimal. Consider a diagonal split instead: 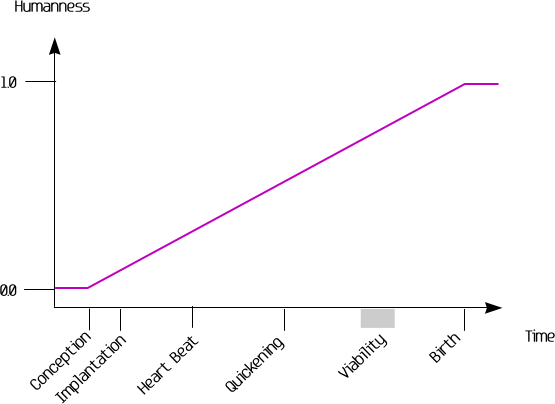 Life begins the moment after conception, but the amount of humanness is infinitesimal, so under this compromise, implantation failures caused by birth control pills would be considered wrong, but insufficiently wrong to merit prosecution – de minimis, as it were. But as time progresses, the humanness of an embryo/fetus becomes significant enough to warrant protection by the might of the state, which means prosecution and punishment. But the punishment would be far less than capital murder until near the end of natural term. In other words, somewhere between completely legal and life imprisonment, there ought to be a $100 fine somewhere, or perhaps a week in the county jail. We can debate that later. Indeed, that’s what we should be debating, instead of the unanswerable question of the exact moment life begins.

Many of you reading this, might be disturbed at the notion of treating some[one/thing] as a fraction of a human. What does that even mean?

Well, one meaning can be simply probability. Consider that standard set by Justice Blackmun: viability. What is the age of viability? It is fuzzy, and changing. The age at which the youngest premature babies survive is one at which most do not. Even the day before birth the probability of live birth is less than 1.0. Were we to use survival probability outside the womb as our sole metric, we would get a fuzzy curve that looks something like this: 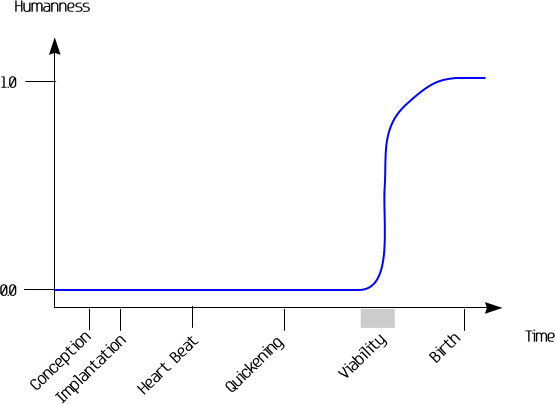 Actually, we could apply a similar standard of viability for viability if there was no abortion. Implantation failure is common even in the absence of birth control pills. Miscarriages are also natural. Applying such statistics we might come up with a curve which looks something like this: 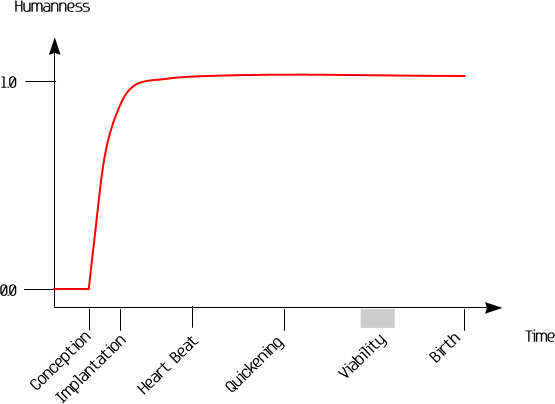 (Do note that neither curve is properly calibrated against real statistics. These are general shapes meant for illustrative purposes.)

Survivability is not the only criterion, necessarily. We each have different criteria ranging from concerns over divine wrath, to concerns over future biotechnology, to basic human sympathy. Many different curves are possible. They could be a mix of partial step functions at various milestones with ramps and curves over fuzzy areas. 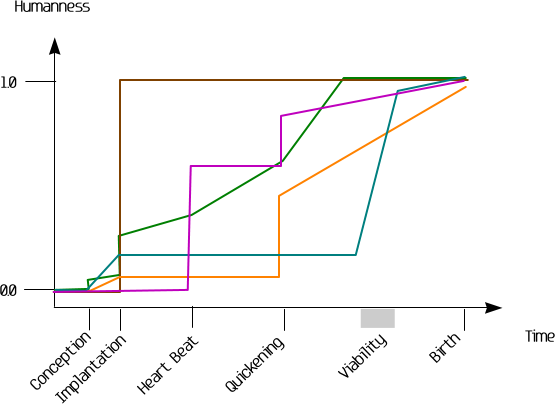 What is your humanness curve? Before you answer that in terms of the views of your religious leaders or favorite echo chamber, let us distinguish between stated ideologies and real views; i.e., revealed preferences, how you would actually act when put to the test.

I have a question for all the conservative anti-abortion Christians in the audience: Do you really believe that early abortion is equivalent to first degree murder? Really? If so, why haven’t you blown up an abortion clinic this week or started a civil war. You constitute a large fraction of the population and a larger fraction of the military. You could probably win. And while war begets killing, the current government is guilty of genocide on the order of the Nazi holocaust and Communist mass starvations. We are talking just war here – if early term abortion is truly equivalent to murder.

OK, the human heart numbs in the presence of large numbers. That’s probably why the Bible talks of loving your neighbor vs. loving humanity. Let’s try a more personal thought experiment. Suppose the Supreme Court ruled that the Servants of Moloch have a constitutional right to toss their firstborn babies into a fiery furnace. Suppose the Servants had a temple in your town. What would you do? My guess is it would be more than the occasional non-violent protest. I bet the Servants of Moloch would be hanging from trees in short order and a few Supreme Court Justices would quickly follow.

Killing a baby is 1.0 murders.

Killing a fetus is not. Or, at least, people, even most anti-abortion religious conservatives, act like it is not.

Now let me turn to the radical feminists in the audience. A healthy unborn baby is due sometime this week. The young mother to be decides that having a baby would mess up her career so opts to terminate. Is this morally acceptable?

Why did Bill Clinton say he wanted abortion “safe, legal, and rare?” Was he simply giving a nod to the remaining religious conservatives in the Democratic fold? Was he wanting to save money on medical procedures? Or did he have some moral reservations about abortion as well?

Late term abortion is not 0.0 murders.

Fuzzy logic may not reflect modern abortion rhetoric, but it does reflect how most people actually feel and react when put to the test.

What is Your Life Curve?

So how much of a human life is a human zygote worth to you? An implanted embryo? A newly quickened fetus? Try to escape the echo chambers and ask yourself honestly. What does your heart say?

Try putting yourself on a jury in your mind. The defendant is a young mother-to-be who terminated a healthy fetus at seven months. What sentence would you levy? At what point in the pregnancy could you throw the switch on the electric chair for committing abortion? At what point would you merely demand a week in prison?

One problem with democracy – or government in general – is that it allows most people to pass the buck on critical moral issues. Imagine yourself as king, queen or high judge. Or imagine yourself as village elder in a society without central government. What punishments do you dole out for abortion at various stages?

This is a difficult moral exercise. It is even more difficult for society as a whole.